The Cognition and Action Neuroimaging Laboratory

What are the effects of handwriting on cognitive development?

We have conducted several studies that document the effects that self-generated writing by hand has on functional brain development. This research began with several studies on adult letter perception, and has led to the following observations:

1) Motor systems in the brain are engaged during letter perception.

2) Young children show adult-like brain responses to letters only after they learned to print letters, but not after learning letters through typing, visual study, or even tracing.

Sehgal, N., Vinci-Booher, S., & James, K.H. (2015, February​).  The relationship between handedness and activation in the visual cortex of the brain.  Poster p​resented at the Center of Excellence for Women in Technology Conference, Bloomington, IN.

3) The benefits of learning symbols through handwriting carries over into adulthood when we learn new scripts.

James, K.H. & Atwood, T. (2009). The role of sensorimotor learning in the perception of letter-like forms: Tracking the causes of neural specialization for letters. Cognitive Neuropsychology, 26(1), 91-110.

4) This benefit may be partially due to the output of the motor act of writing – in the variable symbols that are produced when we first learn to print.

perception using gPPI connectivity analysis.  Presented at the Center of Excellence for Women in Technology 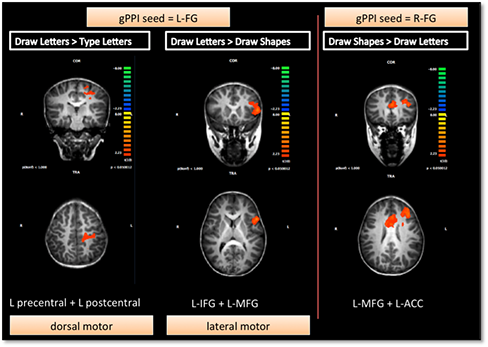 A TIME magazine article, "Are There Really Benefits to Writing Things by Hand?" includes  Dr. James'  research results and observations.

Dr. James' research on handwriting was featured in the September 21, 2014 edition of Parade Magazine.

How Does Handwriting Affect Brain Development? Dr. James explores this question on the September 19, 2014 edition of Sound Medicine, Public Radio's Weekly Magazine About Medicine and Health.

"Does handwriting matter?"  Dr.  James' work was part of the June 2, 2014 New York Times feature on the effects of the diminished emphasis on teaching handwriting skills to school children.

This handwriting research is highlighted in the IU Newsroom Fall, 2014 back-to-school-issue.

During the 2012 Handwriting in the 21st Century Educational Summit in Washington, DC, Dr. James  presented some of her findings from this research.   Watch her presentation.

On January 23, 2012, while at the Summit, Dr. James discussed the importance of handwriting in child development on the Fox News network affiliate in Washington DC. Watch the interview.

Dr. James was interviewed for a feature in STATEIMPACT INDIANA entitled "Why Schools Should Keep Teaching Handwriting, Even If Typing Is More Useful."  (September 29, 2011)

Read the June 15, 2011 Chicago Tribune article, "The many health perks of good handwriting: Not only does it help the brain develop, it can also improve grades and confidence" which features Dr. Karin James.

This body of research was used to illustrate the benefits of handwriting in the Ocotober 5, 2010 Wall Street Journal article "Handwriting Trains the Brain."  (October, 2010)